IRS to Delay Tax Deadline to Mid-May After Chaotic Year 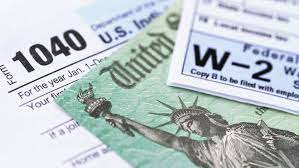 The Internal Revenue Service is planning to delay the April 15 tax filing deadline by about one month, giving taxpayers additional time to file returns and pay any outstanding levies, according to three people familiar with the discussions.

The IRS is still figuring out what the final deadline will be. The agency is considering setting the filing deadline either on May 15 or May 17, according to two of the people, who were not authorized to speak publicly because the decision had not been finalized. May 15 is a Saturday and the IRS typically delays filing deadlines that fall on a weekend or holiday to the next business day.

The IRS and Treasury didn’t respond to requests to comment on the delay.

The filing extension would give taxpayers additional breathing room to meet their tax obligations in what is becoming one of the most complicated tax seasons in decades. The change would come after calls from accountants and leaders in Congress to delay the due date as new legislation and pandemic-related work changes disrupt taxpayer plans.

Among the changes this tax season are last-minute amendments to the $1.9 trillion stimulus bill signed into law earlier this month that give filers a new tax exemption on up to $10,200 of jobless benefits. The individual tax return, Form 1040, is also the mechanism for people to claim any missing $1,200 or $600 stimulus payments from last year.

Besides the disruptions from the pandemic, the changes in tax law will mean some filers will have to wait for updated forms, resubmit their returns, and some will need to consult a tax adviser on how to proceed if they’ve already filed.

House Ways and Means Chairman Richard Neal, Representative Bill Pascrell, and Mike Crapo, the top Republican on the Senate Finance Committee, have asked IRS Commissioner Chuck Rettig to delay the filing deadline, citing the importance of this tax season because of all the tax changes and coronavirus aid administered through the tax code.

The IRS, which has the administrative authority to delay tax deadlines without Congress, also extended the filing season last year at the beginning of the COVID-19 pandemic.

As of early March, the IRS has been behind last year’s metrics in the number of tax returns filed and processed and the number of refunds issued. The filing season, which began Feb. 12, started about two weeks later than usual, and has contributed to the slump.

The tax extension also comes as the IRS has been handed another big task: processing a third round of direct payments to households, this time for $1,400 each. The IRS said it has so far sent about 90 million payments totaling $242 billion.